While Sinclair itself never sold a dedicated program data recorder (unlike other major players in the 8-Bit arena like Atari, Commodore etc.) their Timex partners did exactly that. The American mother licensee Timex-Sinclair released the Timex-Sinclair 2020 Program Data Recorder, their Portuguese daughter later brought the Timex 2010 Computer Program Recorder.
While the TS 2020 can be found regularly at the usual buy’n’sell places the TC 2010 is a rather rare device. After searching more than three years I had the opportunity to get one of those recorders. For those who might be interested I assembled a refreshed manual for this device.

While the silver TS 2020 is more or less a standard analog tape recorder (for the use with cheap standard audio tapes as media) the black TC 2010 is indeed a digital tape recorder. In contrast to the usual devices this one has fixed baud rates for recording/re-play, fixed „volume“ and (tries to) save/replay the ZX Spectrum’s signals in a „square wave“ form. In principal this leads to a „cleaner“ signal with sharper signal edges which usually should lead to a more robust loading and saving of data. The in-build volume control only affects the monitor sound for the user.

Using my analog tape recorders for loading old tape software into my shiny new Sinclair ZX Spectrum Next lead to somewhat mixed results: Very few were loadable, most of the software won’t load. Same was true for my own (freshly saved) data from my other Sinclair ZX Spectrums. Interestingly data that was saved from the Next were perfectly loadable with the older systems. So it seems the newest model is more sensible to data/volume/sound quality than the old systems. Loading data (new and old) with the TC2010 into the Next in contrast worked perfectly out of the box. So the „squarifing“ of the originally analog signals through the TC2010’s circuits really helps with the ZX Spectrum Next! 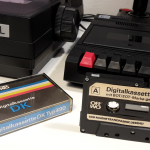 It is indeed possible to use normal audio tapes with the digital recorder, nevertheless there are dedicated media for this kind of data storage. The usual audio tapes are optimized for the best possible recording of audible analog „information“. For the recording of digital square wave data the tape’s magnetic coating should show other properties. This type of tapes were already rare in the heydays of data tape recording – nowadays they are even more rare. One of the biggest sources of this media type was the GDR, where this product was sold especially for the GDR-developed computer systems. They were produced by ORWO and sold under the name ORWO DK Typ 490 Digitalkassette. You can still find those at the usual places in the ’net.