Ok, after having fun pretending all the fancy stuff (like setting up local area networks) I do (or did) with my ZX Spectrum I’ll now tell the truth: I played games on it! 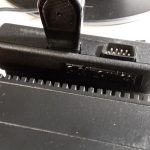 The ZX Spectrum as a game machine did not have a joystick port from the start, you had to buy a joystick interface to connect the then-standard Atari-9-pin compatible gaming device. The ZX Spectrum standard were the „Kempston joystick interface“ compatible products. Like my dk’tronics Dual Port Joystick Interface, which resembled one port with the Kempston standard and a second port which should have been Sinclair ZX Interface 2 compatible.

I plugged this device into my ZX Spectrum, sticked in a joystick to the Kempston compatible port, switched it on and started my software tape tests. And…it just worked. The other port, by the way, worked as well. Fine!

Sinclair itself were late in delievering a „official“ joystick interface device, the ZX Interface 2. Beneath two joystick ports it featured a ROM socket – so you could use ROM based games without the need to longishly load them from tape; just like a video game console. I never had such a ROM based software, but my 2017 test showed: the joystick part of this interface just worked like 25 years ago! 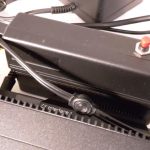 While we’re at interfaces: I have another one, which has a Kempston compatible joystick port. But in real it was one of the most wanted and anticipated devices for the ZX Spectrum: The Romantic Robots Multiface One. When connected to the computer you could press a Red Button on the device and it presented a menu, where you could do a lot of magic things. My main use case for this was to save a loaded and running software as a re-loadable RAM snapshot to tape or a ZX Microdrive cartridge. Especially the latter was a perfect way to put often used software on a much faster storage device. My quick test (saving the loaded „Jetpac“ to a blank tape) showed that it still works. Very useful!