I would like to check whether my old original software tapes are still readable. I must admit that most of them are physically in a really sad state. In the first years after my active ZX Spectrum user period my hard- and software were stored in a damp basement; later (too late) all of the stuff moved to the attic.
The unsuitable storing of the tapes lead to smelly, mould-infected and clotted cassette inlays. But what about the tape content? And: Will my ancient mono cassette tape recorder still work?

The first tape recorder I tested didn’t work – it only hummed (I suppose somewhere around 50 Hz ;-)) and were not able to generate enough drive to spin a tape. But the second one ran absolutely smooth with a crisp and perfect sound!

I connected this one to Paul and inserted the first of my software tapes: The german version of the ZX Spectrum+ User Guide Companion Cassette. Typed LOAD "", started the tape and – incredibly after more than 30 years – it just loaded like 1985. Wow! 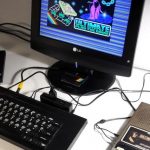 After this first successful test I systematically tried my tapes starting from A (Atic Atac) down to Z (Zaxxon). In the end I were able to load software (mostly games) from 19 out of 24 cassette tapes. Not that bad when considering the overall shape of the storage media. Investigating the problematic software tapes showed that all of those were CrO2 based tapes while the other cassettes feature the usual (and cheaper!) Fe2O3 coating. This fits my 30 year old experience: I only bought „Ferro“ tapes back in the 80’s, because those resembled a much higher reliability – at least with my setup.