The journey continues – the next task after having something printed was to put my original ZX Interface 1 into operation. It was part of the official ZX Spectrum Expansion System, which consisted of the ZX Interface 1 itself, a ZX Microdrive, network cabling and a software bundle on Microdrive cartridges.

Shortly after the purchase of this setup in 1985 I bought some additional blank Microdrive cartridges.

Beneath being the hardware for operating ZX Microdrives the ZX Interface 1 sports a non-standard 9-pin serial connector to drive 3rd-party serial printers. And it introduced the Sinclair version of a Local Area Network: ZX Net. Now that I had two Interface 1 I were able to set up my first official high-performance serial Sinclair-ZX-Spectrum-network – in the year 2017! 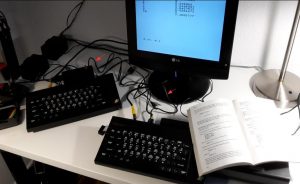 I connected both Interface 1 with the network cable (see red arrows in the picture above) from the Expansion system pack, switched on both ZX Spectrum and typed in the „Roots“ program from Chapter 7 of the „Microdrive and Interface 1“ manual. It’s a little demonstration of how to setup the network in general (i.e. assign network station numbers) and how to send and receive (program) data. 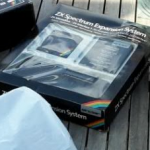 It worked out of the box – so at least the networking part of both Interface 1 seemed to work properly. Another test showed that both of them recognized a attached (empty!) ZX Microdrive by spinning up it’s motor after entering a CAT 1. Marvellous!