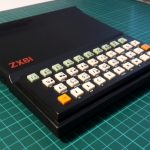 While looking for my first computer I owned (and sadly sold shortly afterwards) I remembered that I not only bought that Sinclair ZX81 plus a 1K games compilation in 1983 but also an additional „overlay“ keyboard. While the device itself had the typical low-cost pure membrane keyboard this add-on push-button „keyboard“ was sold as a semi-professional extension that should lead to a much better typing experience.

Back in 1983 I was rather disappointed – the cheap plastic „keyboard“ should have been attached via self-adhesive tape on the original membrane keyboard. But in real live this did not quite work, because the little computer got rather hot and the adhesive tape came off frequently. So I switched back to typing on the device itself. 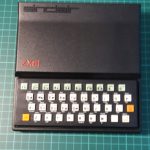 To my own astonishment this overlay keyboard (which was produced at least in two versions) is rather scarce at the usual online platforms – so I needed roughly a year to find one of those Filesixty keyboards in decent condition. The one I got now looks really good and completes the re-establishment of my very first home computer setup.