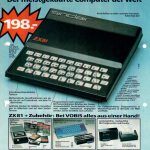 Before I could afford an Sinclair ZX Spectrum 16K in the last weeks of 1983 I did my first steps in the computing world with it’s even cheaper, older sibling: a Sinclair ZX81 (bought in summer 1983 by mail order) with a massive memory footprint of 1024 bytes (1 KB). Yes, really! Like in real life this was the only system we could afford in the first place – nevertheless this tiny device enabled me to gather experience in „computing“, writing my first few lines of code (in Sinclair BASIC) and get grasp of what a „micro computer“ is and how it could be used (and what not!). 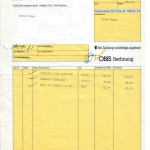 Even as a newbie I were soon bouncing back on that tiny RAM boundaries – the 1 KB of RAM is „shared“ between your own code (and some system relevant variable space) and the actual screen display memory. The more is seen on display, the smaller is the room for the actual program. So I soon thought about upgrading the memory to 16 or 32 KB of RAM. But prices were steep, 16 KB RAM costing roughly around 65% of the computer outfit itself – RAM was really expensive in that times. It was already the year 1983, the ZX81 was somewhat outdated then and even it’s younger sibling, the Sinclair ZX Spectrum, was launched the year before, 1982. A short calculation ended in discarding the upgrade idea and in selling all ZX81 equipment I had to (partly) fund a new Sinclair ZX Spectrum 16K.

Over the following years I must admit that I regretted that I had sold my ZX81. I only had it for some months back then, nevertheless it’s part of my own „computing history“. To my own surprise and by pure chance I were able to get hold of one in the last weeks – in more or less perfect condition. In contrast to the original box/packaging the computer itself seems to be produced just yesterday, no marks, no scratches, even the red „ZX81“ print is still perfect and shiny. And: It works! Some days later I bought the additional 16 KB RAM extension (Sinclair ZX 16K RAM) off from some well-known platform – now I have the ZX81 setup that I did not have in 1983.