The Way of the Board

My original ZX Spectrum was a 16K (Issue 2) version – it was cheap enough for me to fund it.

Later on I upgraded it internally to 48K, what opened a whole new world of software for me.The board itself did a little journey from it’s original Rubber Key Case into a more sophisticated dk’tronics Keyboard.


After that it were put into a ZX Spectrum + casing before it was build into a self-designed black desktop case. Therefore the (modded) dk’tronics keyboard were used as a typical „external keyboard“ back then. In the end (before storing the computer in the basement/atic) it was re-build into it’s original rubber key case. 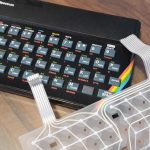 Ok, first things first. After carefully opening the ZX Spectrum it was clear that the keyboard membrane was heavily rotten – both membrane connectors broke cleanly 0,5 mm above the mainboard connectors. So I replaced the membrane with a new one.

To power it on the first time after approx. 25 years I needed some kind of display device. Besides the usual RF/TV connector my Issue 2 board already featured a (badly hacked) „additional composite mod“. I tried all TV sets and AV monitors in my household. In the end only a old cathode ray tube TV set was able to synchronize with the TV output from the Spectrum (the famous Channel 36!).

In the meantime I were able to get hold of nice black 15″ LCD TV set (LG 15LC1RB) with all 8-bit retro computing relevant connectors. 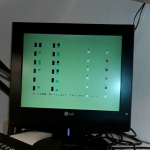 Good news was that it did indeed came to live – bad news was: it is obviously sick, because after the initial ROM reset it hangs and shows some nice coloured squares and some random pixels. Changing to a different power supply helped somewhat as it came up without the hanging but it lost all it’s colours then (only grey scales – not real Spectrum-esque!).

Sad but true – my ZX Spectrum is sick and I did not dare to test my antique equipment and data media with this setup.