Due to the fact that I knew that it will last until sometime 2018 until I can put my hands on the new computer I decided to climb up onto my attic. Fetching my own original Sinclair ZX Spectrum setup and trying to get it back to life seems to be a nice method of passing enough time until the Next appears.

So this is what I found up there – I’m not sure, but it might be 25 years since it saw daylight. 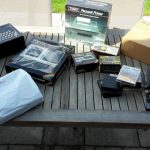 Oh dear, some of that stuff doesn’t look really good (especially the software tape side of things…).