As a pupil in the 80’s I could not afford a professional printing solution (read: DIN/Letter 9 pin impact dot matrix printer) for my Sinclair ZX Spectrum. Nevertheless I were able to save up enough money to buy a Timex/Sinclair 2040 thermo printer in 1985 – which was way better printer than the original Sinclair ZX Printer. It served as the main program listing and occasional picture (or even letter!) printing device during my 8-Bit computing times. 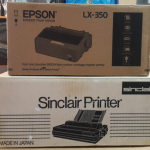 The last months I was still looking for a appropriate printing device that could be attached to one of my (proprietary) Sinclair serial RS232 interfaces (ZX Spectrum+ 128K and/or ZX Interface 1). I was rather astonished that you can still buy brand new 9-pin dot matrix impact printers with a serial RS232 interface – of course from the standard setting company Epson: The LX-350. While I bought one of these (for incredible little money, I must admit – sometimes I have luck! 🙂 ) I found another nice item: By pure chance I were able to get hold of an original Sinclar QL Printer SP-1000QL, which was meant to be a (semi)-professional printing solution for the dedicated Sinclair business machine Sinclair QL. It was a re-badged Seikosha SP-1000 printer with a special QL ROM and – of course – with a black exterior. It has a serial/RS232 interface and is connected to a Sinclair QL with a special serial cable (DB25 to QL’s BT6 serial connectors). The serial interface of the Sinclair ZX Spectrum+ 128k has the same kind of socket – so I had the idea to plug this Sinclair-labelled printer to my ZX Spectrum – having are more professional (Epson-compatible) printer setup after 30 years at last… 🙂

Of course it wasn’t that easy. No plug and play in the 80’s. From various internet sources I tried to learn how the serial interface of the ZX Spectrum 128 was arranged and which pins of the Sinclair QL printer’s DB25 connector shows which assignment (i.e. here). After some hassle (why the heck doesn’t the DTR line work as expected?), some intermediate GND-hacks and a lot of help from the German SPC forum I were able to build a serial connection cable for operating the QL Printer with my ZX Spectrum 128. By the way: Even 2019 it is no problem to buy the usual printer consumables – new printer ribbons are easy to find and rather cheap. Perfect!


While the QL printer was a matter of luck the other 9 pin impact dot matrix printer was no problem: The Epson LX-350 is a 2019 brand new product which can be bought at the usual places. And it even has a RS232 interface (and USB and parallel/Centronics) – so it’s the perfect retro printing machine! In contrast to the QL Printer there’s plenty of information available for the „standard“ Epson serial printer plug/socket assignments – so it was rather easy to assemble a cable for usage with this „breakout“ cable (from Retro Computer Shack) which translates the 128’s BT6 socket into a more common DB9 plug. This time everything worked out of the box. In contrast to the (of course much older) QL printer the brand new Epson printer understands the (in-)famous Epson compatible quadruble-density bit-image graphics mode, so a courageous COPY does really print a screen shot (and faaaast!).

The next step was to assemble printer cables for attaching both printers to the serial interface of the Sinclair ZX Interface 1. From what I had learned from above and consulting the original Microdrive and Interface 1 Manual it was a rather simple task to build up such cables and I were really happy to have a full blown professional printer attached to my trusty Sinclair ZX Spectrum 48K (via ZX Interface 1). Nevertheless it’s still funny to see how extravagant Sinclair Research was regarding their „standard“ interface connections like RS232. Maybe it was one part of their business model to sell special Sinclair Serial Cables to their customers…

Another interesting fact is that even in the middle of the 80’s 3rd party/consumer printers only very seldom had serial interfaces (at least here in middle Europe) – and if those were available the RS232 connection was often a costly „extra feature“). In general the parallel/Centronics connection scheme was more or less the standard. But Sinclair – known for their cost cutting delusion – decided it was way cheaper to use the available technical basis to cheaply realize their idea of a „standard interface“. But hey, it works – so this is how my „Sinclair Workstation“ looks today: 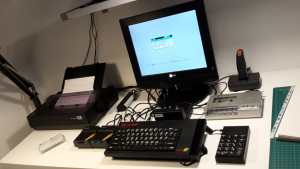 For those who would like to assemble the above mentioned cables for their ZX Interface 1 or ZX Spectrum+ 128K I have collected the connection schemes into a PDF document: ZX Spectrum Serial Connections.