Around the end of 2013 we started to pack our household into boxes because we were to move from our rented flat into our house. Of course all my computer stuff has to be packed as well – so my so-called „Big Box“-Amigas were put into boxes. Starting the whole pack’n’wrap session around November 2013 the actual move was in the end of December 2013.

Buying and moving into a house usually is followed by an intensive period where someone is busy renovating, assembling and building up furniture, doing the first steps in gardening (or terra forming – depending on the general shape of the house’s surrounding…:-)) and anything else you can imagine (or not). Inside the house I started with refurbishing more or less in the basement working upwards to the 2nd floor. My own room – where all my stuff should move in – was indeed the last one I cared for. So my packed systems (and me) waited more or less one and a half year until I finally started to free them from their boxes (and the disks and monitors and manuals and…).

I must admit that I was really anxious – I haven’t touched them for a long time and I had no idea whether the computers will actually boot or not.

How to start? I decided to set up the AmigaOS systems by age – the oldest one at first. So my Commodore Amiga 2000/040 (with a Rev. 4.x motherboard) was the one I opened in the first step. I did this to have access to the internal hard disk (Seagate Barracuda 4GB SCSI) which was fitted in the 3,5″-bay beneath the floppy disk drive. Having experience with HD equipped Amigas which were not switched on for a long time (and in this regards I’ll assume 1,5 years are a long time!) I had the my famous HD Wake Up ToolTM ready.


It may look like an ordinary rubber hammer – but this is deceptive. I attached all necessary equipment to the Amiga (keyboard, mouse, monitor and a Iomega ZIP 100 drive – because of SCSI bus termination) and then did some very medium light beats to the metal frame of the hard disk with the The Tool. After this I switched it on for the first time since 18 months…and…the disk drive gently spinned up into operation without any cracking noises. Phew! Due to the fact that the last boot up was end of November 2013 and we are now in May 2015 my Amiga just remarked that it would be a nice idea to switch to DST. Perfect! 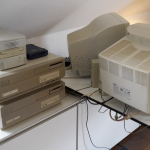 I repeated the same procedure with my Commodore Amiga 2000/060 which booted up without any hiccup just nicely into Workbench (with the same „it’s-summer-now“-message). I must admit that I was somewhat proud of my old ladies – indestructible tanks they are.

My newer systems (read: my PowerTM technology AmigaOS computers) were the next ones. The more modern technology can have it’s culprits, too. For example they have no Kickstart ROM and tend to save vital information for their firmware in some battery-backed memory. Often these batteries loose their capacity over time rendering the system dump and deaf (Who am I? What is a „hard disk“ and what do you mean with „boot“? And, by the way, what time is it?). Especially the AmigaOnes (incl. my AmigaOne X1000) tend to behave not nice with empty batteries. So I started with – in the above mentioned regards – least problematic system, my Acube Sam440ep. After the quick connection of monitor, mouse and keyboard I switched it on and to my satisfaction it promptly booted into Workbench, only with a slight delay in the internal clock. So far,so good.


The next one was my multi-boot BPlan Pegasos II, same procedure as above with the same result (incl. the clock deviation). Due to the known battery leak problems I just connected my A-Eon AmigaOne X1000 to the mains – but left it alone for one day. Don’t ask why. After this special „treatment“ the power up lead to a (sadly) usual behaviour of this system – it won’t boot. This is a known issue the X1000s show especially after a cold reboot – and sometimes (but seldom) on a power up as well. Nevertheless it is a mere inconvinience because after a quick touch to the reset button it thinks over and starts to boot. Fine. After one and a half year all my „Miggies“ are with me again – in our new and fresh semi-retro-computer man cav…ahem…office space. 🙂 Now I started to attach all other peripherals and went on with the very daunting task of catching up with all that happend on the software side of things – incl. the in the meantime published AmigaOS 4.1 Final Edition.