There are various tools in the wild that let you edit and configure the tools menu of your AmigaOS Workbench. Since OS release 3.5 the Workbench has a comprehensive ARexx port that can be used to build up and alter your own menu entries (incl. submenus) or to attach Workbench commands to any key you like (aka Hotkeys). 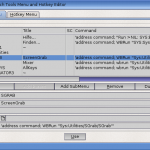 Nils Görs developed one of this above mentioned tools with the help of ARexx and the marvellous AWNPipe by William Parker. Nils‘ last semi-public version 2.0 was classified as an alpha release and had indeed some bugs that at least led to crashes with AmigaOS 4.1.

I used this version 2.0alpha since years with my AmigaOS 3.9 systems and missed its functionality on my AmigaOS 4.1 environments. So I decided to take a look at T.H.E. and eventually new versions – which now run without crashing on OS4.1 – came up.

• Big thanks to Nils Görs and his T.H.E. and – of course – William Parker for the AWNPipe.
• Thanks to Christoph Gutjahr for allowing me to include his lastest public SortIcons.rexx and Olivier Fabre for his additonal helper script.
• Used software: CubicIDE, CygnusED, SimpleCat, ArtEffect4, IconEditor.

Here, Aminet or from OS4Depot.