Type, SAVE and RUN

Like most of us mid-80’s 8-bit-people I was an eager „typist“. Beneath buying software (or testing…erm… backup’ed software) a lot of games and utilities were type-ins from the various computer magazines.

My own programming skills rose with each listing I typed in (from Sinclair BASIC to Z80 assembler). The „educational“ aspect was of course not the main reason for doing this laborious work, I just wanted to play that game (or use that tool or productivity software or…). And every now and then there were real pearls hidden inside the magazine pages… 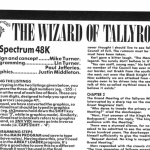 One of my favourite games was a D&D like adventure game published as a type-in in issue #54 (April 1986) of C&VG. After the typing (a real effort!) and saving the program I started playing the game and really liked it. But I could not win – because the game just stops at a certain point with an error message! Wuh?
So I started to analyze the problem (and program) – maybe I made an error during the type-in session(s)? But I could not find anything in that regard. So what now? Because I really, really wanted to play the game I started an even deeper analysis of the inner mechanics (call it Business Logic today? 🙂 ) of the program and the additional data files…

I assume I had to much time as a teenager – I found out that there are some lines of code actually missing! And the datafile (representing the game’s world map) was not o.k., either. After reverse-engineering the missing BASIC code lines and fixing the MAP data the game really worked and I were able to play it until completion. 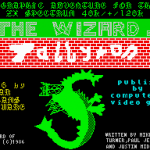 And just for the fun of it I designed a loading screen for the game, added a „fancy“ font (at least what I thought what is fancy in 1986 😉 ) and migrated the whole lot to a ZX Microdrive cartridge (incl. the SAVE option).

Being a good boy I wrote a letter (using my own text editor program, printed on my humble Timex/Sinclair 2040 printer) to the Computer & Video Games „The Bughunters“ section, describing my bugfixing efforts for their type-in. Moreover I added some tips for playing the actual game…

Dear Bughunters!
After reading you May Issue (the listing „The Wizard of Tallyron“ seems to have no bugs in it.), I must admit that there ARE actually some errors in the listing. But it’s not the Bughunter’s fault but a result of unattentive programming (Sorry, Mike…).
You have to change/add the following lines to gain a correct program:

Save this new version on another cassette.

Moreover you have to alter the number array (MAP).
Load the original program as normal; you will start at TAUTREE. Now press [BREAK] and enter:
LET A(7,14,3)=9 [ENTER].
Save this changed map directly behind the altered main program:
SAVE "map" DATA A() [ENTER].

This version of THE WIZARD OF TALLYRON will work correctly.

P.S.: I’ve played „TALLYRON“ very often and I were able to solve it! So I’ve compiled some tips… Moreover I hate MOVIE: It’s slow, unplayable (without a save option like in MARSPORT)& graphic=Ultimate.

To kill the Black Knight (he defendes the M.I.P.!) in the Castle of Fear you have to use a lot of VIAL OF FIREs.

In the Lost Town and in Seaville you won’t get 2ndLevel Spells!

You are in the 2ndLevel when you have more than 999 Experience Points.

The door in the Castle of Fear appears when you cast the Dispel Magic Spell.

You can only have TWO 2ndLevel-Spells. So choose carefully!

You have to collect three PIECES OF METAL they will form the key you have to use in the Castle of Fear after incanting the Dispel Magic Spell.

You will gain the three pieces in the GREAT FOREST (hermit), in the MOUNTAINS OF SUNSET and in the FOREST OF DARKNESS.

You may sell the weapons and the armours of dead partymember!

I received a short but nice reply from the magazine staff. But I think the bugfixes and tips were never published. So the gaming tips and my 86’s additons (font and screen) to the game are published here… 🙂 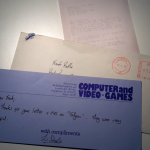 Interestingly enough Computer & Video Games (and Star Dreams Software – the authors) sold a „professional“ version of the type-in for £2.50. By the way: this is the version of the game that can be found at Spectrum Computing or World of Spectrum. I hope the authors found (and fixed) the above mentioned shortcomings in their (semi-)commercial version as well… 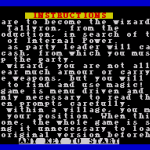 By the way: the version of the game that is linked here is the actual type-in including my fixes – so it is NOT the same version that can be found at WoS or SC.org!